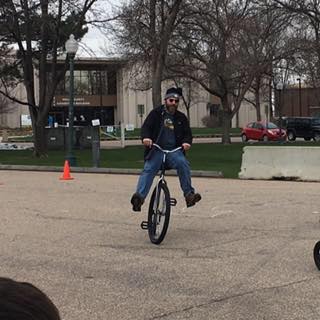 Sometimes weeks can be rough as a single parent.  File that in the big cabinet drawer marked “No Shit, Really?”

This week was a little rough with my son.  He’s turning 9 this month and for the last several weeks he has been Needy.  This last week, he was fighting a cough he brought over from his mom’s house and also decided he was going to have insomnia.

My usual go-to of giving him a big hug and sending him back to bed hasn’t worked this week.  He’s just up an hour later, crying again, this time asking for some kind of sleeping aid, whether it is being able to play music on his iPad or melatonin.  I’m not a big fan of throwing pills at a problem, and I tend to suspect that the iPad has a big influence on whether or not he will sleep sometimes.  I’m fighting that electronics addiction tooth and nail at my house lately. I’m just as guilty as he is about it sometimes too.

I think most of us are these days.

Electronics have been around in this capacity since the 1980s. I know I spent an inordinate amount of time on my Nintendo at his age.  I also used to get super cranky with my parents and forget to eat and also fight with my friends after several hours of Mario Bros. or Ninja Gaiden.  The stupid B button sticking was probably more rage-inducing than any violent game the media wants people to blame for school shootings anyway.  That and lack of glucose going to your brain.

Electronics are the same as the cathode ray nipple of television back when my generation was growing up. Only back then you had to wait for your show to come on and suffer through commercials.  Kids these days are all about instant gratification.  Like Veruca Salt, they want it NOWWWWW!!!!

My son is actually pretty good most of the time, but I think lately, since I have started a new relationship he has the Fear of Missing Out, because sometimes it isn’t about him.  Single parents I know often saturate their kids with their time because they don’t have a whole lot of much else going on.  I have a friend whose daughters are often up until 11:30pm with her, and she feels overwhelmed.  I’ve had other single friends whose kids accompany them everywhere and they become the center of attention wherever they go, basically dictating what the adults do at any given moment.

Sometimes it’s like he keeps a tally in his head of exactly how long I am required to spend time with him.  If I am texting or calling someone, not even just my girlfriend, he demands extra attention later.   These bouts of insomnia seems to correspond with nights I’m on the phone when he should be in bed.  I get that.

When dealing with anyone, sometimes you need good boundaries.  I also get that for the longest time, it was just him and me.  A past relationship also tended to dote on him and give him 100% of her attention whenever she was around, which I think didn’t do him any service.  Sometimes, kids have to just entertain themselves and not be the center of attention.

This bit is hard.

This weekend was rough because after going through an entire week of needy kid waking me up all night, it was 90 degrees.  My GF, son, and I went to hang out in Ft. Collins.  Some genius decided to turn the splash park off in Old Town, so now instead of watching my son play in the fountain while we relaxed, we were dealing with a kid who was “Bored.”

Most parents crap their pants at these words, especially my generation and those after it.  The dreaded temper tantrum.  The clenched teeth, the whole panic sets in of a bored child and how heaven and earth have to be moved in order to placate them.  Which is also why teenagers are a pain in the ass these days.  The word No isn’t used enough on kids.  And I have seen enough parents toss their phones to their kids so they can sit around like zombies watching YouTube or playing games on their phone rather than deal with it.

The adults in our party wanted to just sit and relax, so we went to an open area with cornhole, and other kids running around, and chairs and live music, and my son proceeded to pout and whine and bitch and moan the entire time.  It was all about what he wanted to do.  As much as it set my teeth on edge, I waited him out.  I didn’t throw ice cream at him, and I sure as hell didn’t give him my phone to play Pocket Mortys for an hour of peace and quiet.  I just kept telling him to go play.  And he would shuffle back, “bored” and only do things when he thought I was looking.

These days are hard because as a 9 year old, he should be able to figure out ways to entertain himself.  Do I do this stuff at his Cub Scouts events?  What about his school concerts?  Or some animated kids’ movie I would rather never sit through?  No.  Because when I was his age, I learned to amuse myself.  My parents weren’t required to hover over me as though their total engrossment of my adolescent life determined whether or not they got divine reward or cast into a fiery abyss of hellish torment.  Not like my generation feels the pressures of.

His being “Bored” has no impact on his needs as a person.  Sometimes, we are bored. Like my meetings at work. And it isn’t anyone else’s job to entertain us.  I think the sooner kids learn that, the less entitled they will become.  I get that sometimes he needs some TLC, but sometimes kids need to be reminded that it isn’t always about them.

That part was hard, because he does enjoy his time with me and with someone new in the picture, he gets even more attention.  But attention is bad sometimes, especially when kids will take every ounce of it you give them and still expect more.

It’s a balance.  And being a parent is a work in progress.  Sometimes it sucks and you fall flat on your face.  For the most part it is thankless. You get more blame for years of therapy than you do for the character you hope you can build in someone.

Anyway, I’ve got nothin’.  But what I don’t want is advice.  You’ll get a lot of that as a single parent too. Unsolicited.  Useless advice.

My advice to you…stick to your guns, and even if it pulls at your heartstrings, boredom never killed anyone.  But would it have killed the city of Fort Collins to run the goddamned splash pool in Old Town Square when it was 90 degrees on a Sunday?