This moment from the show Bojack Horseman really spoke volumes to me.  It comes on the heels of a recent breakup, which unfortunately, is part of what it means to get out more.  It’s the human condition.  It’s something all of us will probably encounter in our lives, especially if we venture forth into the uncharted territories of the heart.  Getting out more is as much about inner discovery as it is picturesque places to vacation.  Interpersonal relationships are hard.  Those of us who have experienced the tragedy (for lack of a more visceral word) of divorce, know this to be especially true.  So much of this journey is finding your footing again.

When you are young, it might be hormones that cause you to overlook certain things, but sometimes, when you are older, your desire to have optimism after such a hurtful thing as a bad marriage or unexpected divorce can blind you as badly as testosterone or estrogen.  As you get older, there are fewer options, and all of them have baggage. Yes, myself included.

After my divorce, I was lucky enough to find someone amazing.  Things were going great, if not rocky at times, but we all have baggage.  The romance was the stuff epic poems are made of, but eventually, it came to an end– and I have found myself single again.  However, the more distance I gain from the relationship, the more the rose-colored glasses have been taken away.  And so, I have been seeing those red flags for what they were.

A few nights ago, I was on the town.  Alone.  One of my favorite pastimes is people watching.  I enjoy going to downtown Fort Collins and watching how people behave, how they dress up for each other, and the entire fish-tank experience.  Friday night, however, as I was sitting outside a bar, having a drink by myself and watching the people.  It was a scrumpy and it was godawful.  But, I had paid $6 for it, and it was going to be consumed.  I’m cheap as well as stubborn.

A young woman walked out of the bar to have a cigarette and approached me at my seat at the patio.

“Just people watching.  How about you?” I answered.

She asked for a light, but I’m not a smoker, so I didn’t have one. She dug through her purse and found a lighter and started to smoke. We shared a conversation that went from various topics such as where either of us was from to Pickleball–which is apparently a thing.  Her name was Kelly, and she wanted to know if I wanted to come inside and play some ping pong with her and her friend Abby.  “You don’t have to be alone out here,” she said.  I agreed.  I figured I didn’t have much else to do.

Kelly got in close and tucked up against me, her arm threaded through mine as she guided me back into the bar.  She introduced me to Abby, who left a few minutes later.  Kelly didn’t look all that surprised.  To put it lightly, Kelly’s body language was aggressive. Heavily flirting, constant touching, the “Big Eyes,” etc.  She offered to buy me a drink.  I said I had better not (as the effects of the scrumpy were just now working their way into my central nervous system), and I had to drive home so I could get to bed early for a roadtrip in the morning. She informed me she only lived four blocks away and I wouldn’t have to worry about driving. 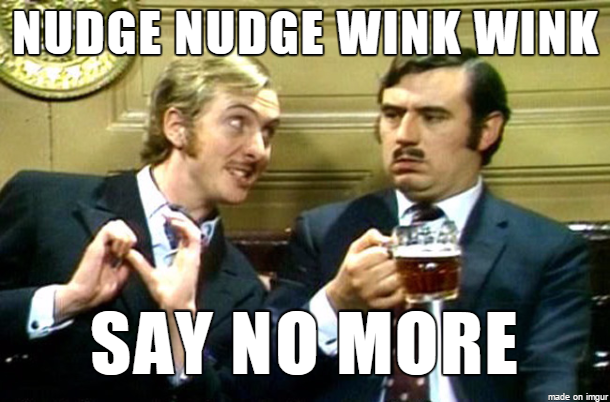 She led me to the bar.  The bartender took her order and asked me what I would be having.  “I’m good,” I said, waving him off.  Aggressive Kelly gave me an annoyed look and so I thanked her for the offer of a drink and set back outside to enjoy my evening. Alone. I sat down at a stool inside the adjacent bar and asked for two glasses of ice water.  They asked if I wanted anything else, and I said, “No, just the water.  I just got away from someone who was super-aggressive.”  They understood and kept my glasses full.  Hashtag metoo.

So many red flags.  The good news is I have both of my kidneys, I don’t have more child support to pay someone, and it doesn’t hurt when I pee.  Yes, I am being a little melodramatic. You might even be saying,  “It was just a drink.”

As I drank my water, I remembered something from my past relationship that started to eat away at me.  A few times, the woman I was dating would go out on the town with friends or trips abroad.  She would tell me later about how several men had offered to buy her drinks or would hit on her.  One night she bragged about having upwards of six drinks bought for her.  No mention of “No thanks, I’m seeing someone.” That was never brought up.

At the time, that made me feel insecure.  But I suppressed that thought.  If I brought it up, I was reminded that jealousy was unattractive.  And how none of her friends had thought it was inappropriate. It was no one’s business if she was seeing anyone.  I accepted that on faith. I shut up about it with her.

But after my experience with Aggressive Kelly, it reminded me of the ritual of going out, dating, and meeting people.  When a stranger in a bar approaches you and offers to buy you a drink, it is a minor social contract.  What they are doing is presenting you with a small gift in exchange for your time, the chance of getting to know you, and also the possibility for something more.  In accepting, you are going along with the expectation that as long as that drink (or the affects of that drink) is around, you will talk with them, dance with them, etc.  If you accept another drink, then the time is extended.  The ritual is all about options for something more.

They didn’t buy you the drink because you looked thirsty.

Accepting the drink, in no way, obligates you to do anything other than maybe drinking it.  But in the ritual of being single and in a bar, accepting it does come with some implications.  I had decided not to enter into that arrangement at all; it was my choice.  It cost me nothing to refuse the offer.  It hurt no ones feelings.  It was a boundary I had made, and it felt good to make.  There were no mixed signals in refusing the offer. I was not presenting myself as anything I wasn’t. I was not interested. I also learned that I have standards.

I also realized I wasn’t crazy.

I thought back to my former relationship and why it bothered me that she used to let men buy her drinks.  Sure there was the caveat of “I’m not going home with you,” she said she would tell them.  But why not simply refuse the drink? I had done it just now.  It was easy! (And I am single, I wouldn’t have been hurting anyone.)

This is what they hear when you don’t say “No thanks.”

I have asked people about this before and since.  The general consensus is “If you are dating someone, you don’t accept the drink.”  That much seemed to be common knowledge. It isn’t hard at all to say “No thank you.”  In accepting the drink from a stranger, you aren’t exactly  being trustworthy of someone you left at home while you were on the town with your friends.  And you aren’t being honest with the person buying you a drink either.  Because even if you aren’t going home with them, that doesn’t mean there aren’t other possibilities that are still on the table.

Is hurting the trust someone has in you worth the $8 for a watered down well drink?

Relationships are hard, and trust is a major part of that. Especially as you get older and more damaged. Boundaries are crucial, as well as knowing what is good for you or not.  Anyone who has been hurt, through divorce, or just bad relationships should know this more than anyone.  But we tend to see the world through rose-colored glasses.  Taking it on faith alone that we won’t get hurt this time. That our demons and mistakes are lying to us.  We lean towards having no reservations, and when we feel hurt, we tell ourselves that’s just the past talking. The advice we get from friends is always through their lens. Sometimes, when something does hurt, or doesn’t seem right, we need to be able to pump the brakes.

Our feelings are valid. If something bothers you, you shouldn’t be afraid to discuss that with your partner (I had made that mistake). If it isn’t about this, then maybe it is about something else.  Usually the red flags are groups of red flags, building on each other to form a great big “Oh hell naw!”  Talking about them is the only reliable way to figure it out.  One day, when I am ready to get back out there, I’ll keep that in mind.  I think a lot of people get hurt over and over because they think they have to be blind to things that don’t seem right.

The truth is, you don’t.