More than a few of my posts on this blog account for some of the experiences I have had since my divorce in 2014.  Only 4 years out, I sometimes feel like those years of marriage were a lifetime ago, sometimes, they feel like they were only yesterday.  And worse still, in some dreams (nightmares really), I am still in the process of escaping a very bad situation.  I write about these times less as a therapeutic reason, but more of a way to help others who read this blog to process their own experience.  You see, when I was getting divorced, there really wasn’t much out there in the realm of what to expect.  So, maybe this is my way to help guide others.  To be a friend you never knew you had.  Or maybe as a writer, I just have to vomit forth stories that are constantly churning in my mind.

Recently, a cousin of mine, who is recovering from getting run over by an angry heifer had the opportunity to go through boxes of old pictures at our grandparents’ house.  He started posting them on Facebook and it was great to see.

The reason for this is when I left my marriage, I had to leave behind so much of my own personal history.  Due to malice, immaturity, or vindictiveness, things that were mine from before the marriage were never returned.  This included family heirlooms, pictures of my childhood and growing up, and even pictures of my own kids from when they were little.  When I started off on my own four years ago, I had little more than a car load of belongings and whatever family and friends cared to donate to me to get my life started again.

It was like I had experienced a house fire, and anything that was in that house was lost forever.  It’s strange to know that these things still exist, but they will never be yours again. Of course, they are just things, but so many of these mementos we gather are ways we bookmark our past experiences.  The human mind can only hold so much, and 90% of what we have experienced is archived.  Often we access those pieces of our history via triggers.  It could be a smell (possibly the most powerful recall trigger), a sound, a word or phrase, but more commonly it is through visual stimuli.  Photographs.  Trinkets.  Letters.  Objects.

Like any traumatic event like a fire, sometimes it is difficult to look past that moment.  The focus of your life becomes a reaction to that trauma.  It begins to define you.

I had lost all of mine, other than the few pieces my parents had, which to be blunt, pretty much stopped when I was 14 and became an unbearable teenager.  My parents have photo albums filled with pictures of sunsets snapped on 110 film, or random relatives I don’t even know the names of. Packets of photos of thumbs, long stretches of highway shot over the hood of a moving vehicle, or blurry shots of deer, zoo animals, etc. There are no pictures of my Prom, Homecoming, or much of my High School or College years. 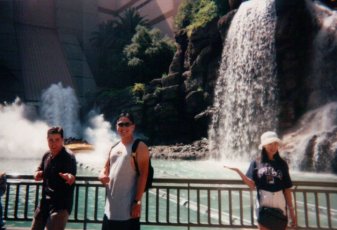 A rare pic of me shortly after graduating college

I grew up in the time before camera phones.   The friends that might have taken the rare snapshot on a disposable camera have drifted away, or have all of their past sealed away beneath piles of boxes in basements across the country.

So when I saw these pictures, it opened up a whole bunch of old memories.  Times and events I had forgotten about.  In my healing mind, there was little depth.  Much of my adult life had been dedicated to simply surviving.  And unless the stories were the same old ones recounted by friends I have reconnected with, much of it was gone.

The Harris men (me with hair)

This was like finding old archival footage of a different era. It not only brought back some old memories, but it also restored some of my identity as well.  After all, we are the culmination of our experiences, good and bad. But it also gave me a way to look past the trauma of my marriage and divorce.  To see into a different time when I was growing up, when I was just a young man with a blue car starting out on his journey of adulthood.  A time when I had hair! 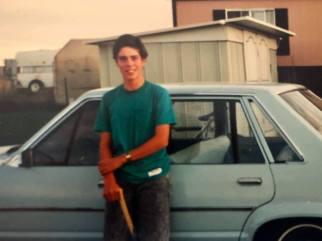 It gave me perspective, to look across–no, to look through the storm of that chaos of all those years to before.  Back to a simpler time, even though I didn’t know it then.  A time of innocence.  Possibilities.  A time I get to reclaim and own once again instead of feeling as though it is being held hostage.  It gives my life provenance. I am no longer feeling like my life ended at my 10th birthday and resumed when I was 39.

I for one am grateful someone kept all this old junk around.  And I am grateful for my cousin for being banged up and bored in the house for the last month! 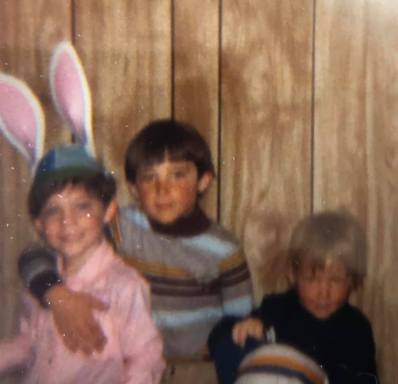 Right to left: Me in the ears, my cousin Jason, and my cousin Cory

2 thoughts on “Things I lost in the fire”