I have lived in Colorado nearly my entire life (except for a misguided year I lived in Laramie, Wyoming–there is a significant difference between Colorado and Wyoming in spite of what you may think.  Highway Patrolmen from Wyoming will remind you of this from the looks on their faces every time they glance at your green license plate).  As I kid, I didn’t know how spoiled I was.  For family trips, we would cross the Mojave Desert on a long two day drive to San Diego, where my grandmother lived, and on the maps, every mountain range that was promised in the same light green of my Medicine Bow, Never Summer, Zirkels, and Mummy Range, I was met with disappointment ever time.  Dull, sandy hills without forests, much less snow, all the way until Southern California.  Northern California has mountains more like Colorado, which just made me homesick.

East of the Mississippi River, the mountains are ancient, rolling hills covered in forests.  All of which are beautiful, but lack the stark majesty of mountains pushing up to the 14er limits that you will find in Colorado.  Proper tree lines, snow-capped peaks, tundra.  Aspen forests.  Pines.  Pining for the pines.

The first time I saw Ouray Colorado, (pronounced Your-ray or You-ray) I was 18 years old.  It was for my high school Senior Trip.  In mid-May, Lower Cascade Falls was partially frozen, and from town, at an angle, you could put a quarter into the telescope and watch people climb the ice.  I have been back a few times since then, but never for very long.  Just passing through.

This year, Ouray was the destination.  This time I got to see the sights the town is known for.  Box Canon Falls, Lower Cascade Falls.  Hot springs.  Hiking.  Exploring the town itself.  The town is build right up against one of the most impressive mountain ranges in Colorado: the San Juan Mountains.  As you head south from Montrose on Highway 550, they don’t even look real.  A jagged set of teeth, snowy, forested, emerging from a desert plain of mesas and scrubland.  Mt. Sneffels and the accompanying sub-range is what you would expect a kindergartner to draw if you asked them for a picture of the Rocky Mountains.  It is simply unreal, and easy to understand as you pass through Ridgway and these mountains are looming over you in the distance, exactly why they called Ouray the Switzerland of Colorado. 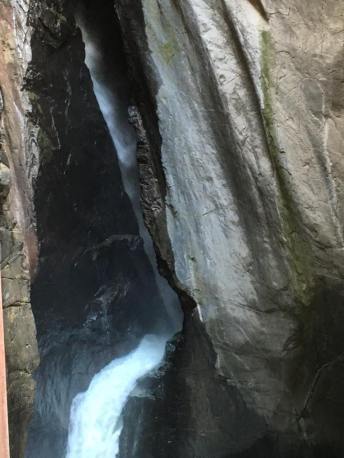 Upon entering the valley, following the Uncompahgre River down from Ridgway, everything is green.  Horses crop at grasses fed by the spring runoff; dappled appaloosas, black, even the rare all white variety too!  Before long, you reach the town of Ouray.  You are greeted on the north end by the town pool, which is one of the largest hotsprings fed swimming pools in the country.  Town itself is build on a hill, with turn of the last century storefronts all slanting at an angle from the streets.  Dirt roads rise up to touch the foot of the mountains surrounding the town.  Probably most impressive is Lower Cascade Falls, which errupts from a cliff less than a few hundred yards from town.  Box Canyon Falls is at the other side of town, with a suspension bridge you can see, and a nice walk of less than a mile to see the entire area (for a very low fee).  In between is the grid work of a town that hasn’t changed much in the last 100 years. 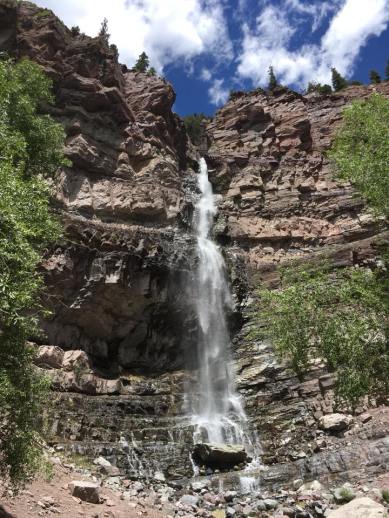 It really has to be seen to be believed–yes, I know that sounds cliched.  My pictures just don’t do it justice.  Perfect for an adventure trip, romantic getaway, or even reaching enlightenment.  Among things to do in Ouray are hiking, Jeep rentals/tours, visiting the falls, shopping and sightseeing, climbing (rock and ice), and soaking your bones in a hot springs at the end of the day, or after a nice meal at any of several delicious restaurants.  Talk to a local for recommendations.  Even if their recommendations are somewhat wussy (come on, we’re in the mountains, dude!  Don’t suggest a place with a really mean salad!)  Sometimes it is good just to follow your nose and stop somewhere the ambiance just feels right and lets you enjoy the scenery while you eat.

A trail winds all the way around town, from Cascade Falls to Box Canon and beyond.  It would probably take about a day to hike the entirety of it if you are an advanced hiker and had more time to dedicate to exploring the area than I had allowed for on this trip.

So, considering my bias for all things good in this world, with Colorado being near the top of the list, Ouray still takes my breath away.  Maybe Switzerland should be called the Colorado of Europe?  hahahaha!

One thought on “Ouray: The Switzerland of Colorado”