Colorado is a state of many facets.  We have our mountains, our forests, our prairies, our highland deserts, and our…beaches?  That’s right, Colorado has beaches.  With waves no less! 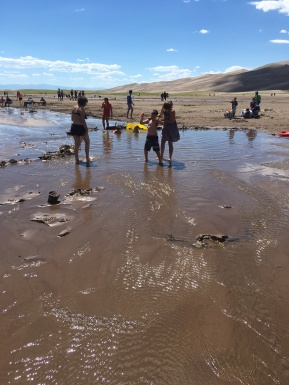 One of the many National Parks in the state is the Great Sand Dunes National Park and Preserve.   Located at the foot of the western slope of the Sangre de Cristo Mountains in south-central Colorado, at about 8600 ft. above sea level, and near the town of Alamosa, the Great Sand Dunes is as close as it gets for a beach in Colorado.  Or the closest Colorado gets to Arakkis or Tatooine.

Compared to Rocky Mountain National Park or Mesa Verde, there aren’t a lot of draws to this out of the way National Park.  It is overlooked by mountains pushing the limits to be considered 14ers, with many others in the region exceeding that mark. Numerous hot springs can be found in this geologically active area, but perhaps one of the best things about this park is how remote it is.  You won’t find the crowds you do here that you would at RMNP.  The price of admission is still pretty low, with most visitors not venturing past the first quarter mile where the dunes rise high like Saharan peaks.  Snowboarders ride the dunes down and sunbathers drink in the rays as well as linger on the shores of the beach, with real waves created by the geological phenomenon which is Medano Creek.  The process of erosion in the sandy bottom creates dams along the length of this creek as it passes over the floodplain adjacent to the dunes.  When the dams break, the water rushes downstream, creating a wave effect.  During runoff season, these waves can be pretty impressive, but as the snow melts in the mountains above, later in the season, the creek bed is just a shifting trickle compared to earlier in the year.  Either way, it’s still pretty cool!  And it’s a good place to cool your feet or break out the swimsuits.

Beyond the tall dunes are miles and miles of more dunes, and not much else.

So what’s so great about dunes?  Obviously you have never rolled down one if you have to ask that question.  The entire area is literally a giant sandbox.  You can run, fly kites, build castles, dune-surf, or just about anything you can think of that is fun in miles of unvegetated sand.  You just can’t drive on it. So leave your paddle-wheel ATV at home for this trip.

You will probably wear yourself out from running on sand and walking up and down the dunes, quoting Lawrence of Arabia or Dune.  Or Spaceballs.  Or complaining about sand and how it gets everywhere, like a movie series prequel which shall remain nameless.

It’s a good thing there are open showers at the rest area to help with that when you are ready to hose off.  Just a pro-tip, however, I made the mistake of getting my sunscreen on just before rolling down the dunes.  The effect is something like making sugar cookies.  I was still picking bits of sand out of my scalp months after.

Published by Clinton A. Harris

I write stories and I talk about things as though I am an expert. Sometimes I am! I write about places I've been and interesting people I have met along the way! View all posts by Clinton A. Harris