A couple summers ago I decided to take advantage of a long weekend and head out at dusk to do some solo camping/backpacking.  I picked an area I was familiar with, since I had hiked and camped there a number of times.  My friends and I just used to refer to it as the Mountain.  To others it might be better known as the Cabin Creek area.  For a number of years, it was undeveloped, being on the other end of ranch land which prohibited public access to the area.  Laws changed, however, in the 1990s, opening public lands again, regardless of who owned the land in between access roads and public lands.  This also opened the area up to logging, which was instrumental in building roads to access timber, but also played a part in cutting out all sorts of old growth pine forest.

When I got to the trailhead, things were a lot different.  I hadn’t been there in at least 15 years.  Back then, a buck and rail fence with a gate marked the entrance.  The trail started off as a logging/service road that crept up through dense lodgepole pines until you reached the footpath which snaked its way up the mountainside, some of it very steep, but still obvious for the most part.  Twenty years ago, a friend and I hiked this area with three feet of snow on the ground, when there was no trail and we had the physical directions of Up and Down as a guide. Up lead to timberline, down would eventually take us to the valley floor and presumably a road. 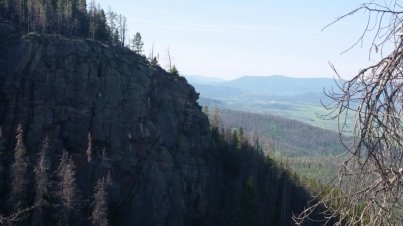 The other path less traveled

So much had changed.  Logging had erased any sign of the trail and after hiking along the road for a while, I soon came to realize that it was leading me north, miles away from where I needed to be.  So, I decided to break off from the trail.  With 50 lbs of gear in my old aluminum frame pack, which hadn’t been used since the last time I climbed this mountain, I had food for a few days, a tent, a sleeping bag, and a water filter pump.  In recent years giardia had found its way into creeks that as a kid, I would have drunk from without a second thought.

A hawk circled above me, calling out once in a while, reminding me of its presence.  I decided to use the same logic.  I knew that a trail meets the ridge-line of the Medicine Bow mountains at some point and from there, I could find the original trail I had missed on my ascent.  Straight up the side of a mountainside, through heavy pine forest, with a 50lb pack is not as easy as it sounds.  Especially when you are out of shape (nearly 20 lbs heavier then than I am now), asthmatic, and at about 9500 ft. above sea level.  And climbing.

Slow and steady wins the race, however, and eventually I found myself on top of “Sheep Peak” which is one of probably 400 Sheep Peaks in the state.  I’m glad I took the path I did, because this is what the alternate route was.

Along the ridge, I was able to follow cairns, but I realized I was miles north of what I remember hiking in the past.  I kept on, following the ridge south, my feet killing me, my heart still racing from the climb. My pack was coming apart and if I wanted more water, I would have to drop down below treeline to find a creek to pump as it was fairly dry up on top.  The wildflowers were out.  Mosquitoes were kept at bay by the wind, but it was a warm, breezy day.  No signs of lightning yet on the horizon.

I continued along the crestline trail, snapping pictures on my camera phone.  Up at 11-12,000 feet, by yourself…there is no feeling to describe it.  I could see the patchwork below of clearcuts.  Though they look like eyesores, they actually provide areas for wildlife to gather and allow people to see more than just trees from their vantage point.  In time, the aspens take over, then the pines return.  All part of the cycle of life for an alpine forest.  Other than the few logging roads and the occasional tag, the Rawah Wilderness area is mostly untouched.  Difficult to reach, especially from the North Park side, I might have been the only person to take the path I had in decades, if not ever.  As a solo hiker, this is something you need to keep in mind, since one missed step could mean a snapped ankle or bone and you are essentially screwed.

The area has also become reacquainted with mountain lions, bears, and is choked with moose. Moose are possibly the most aggressive animal in North America and they will jack you up.  In wild terrain such as this, I carry a loaded pistol for protection against animals, for my own safety.  It would also be a decent way to signal for help if needed.  Three shots in succession is the universal code for emergency.  Whether or not there is anyone nearby to hear it is the question.  Along the way, I dropped a knife, as well as part of my backpack.  Those items are gone, ready to one day be excavated by an archaeologist in a civilization completely unknown to us.  Offerings to primal gods of forest and crags who hold onto such things.

To the west, the clouds were forming into thunderheads.  I was tired, and one of the straps had completely come apart, making me feel like a big man on campus with his book bag slung over one shoulder instead of a backpacker.  My legs jerked with sewing-machine foot from the climb and didn’t seem like they were going to stop anytime soon.  As I hiked north, things became more familiar and eventually, I decided rather than be stuck on a mountaintop in the rain with a leaky tent that hadn’t been used in twenty years, with a backpack that was falling apart and a body that was screaming for help, I decided to use the obverse of my logic and hike back down the mountain.  I could see parts of the old trail through the trees.  A switchback.  A clearing.  A rocky outcropping.  I got a bearing with my compass and using my orienteering skills I set off down the mountain.

The path down wasn’t much easier than the path up.  Recent rains had made the ground slippery.  The trail, when I did come across it, hadn’t been maintained in years, making it impossible to follow.  Even with a new set of boots, it was hard to keep your footing.  Sometimes I found myself sliding down the mountain, trying to keep my pack in one piece as it continued to shake apart with every step.

Finally, I reached the trail and followed it back to the original, once-familiar trailhead.  Three clearcuts had nearly erased it from existence.  No trail was marked here anymore.  The mountain was claiming the path as its own again. By the time I reached my car, lightning was pummeling the peaks and the skies had turned dark.

Since then, I have gotten in better shape, my equipment has been replaced and upgraded, and although solo backpacking is a thrill, I have more people who will come with me now.  This summer, I am hoping to tackle the trail once again.  Better prepared. In better shape.  And ready for adventure this time around! 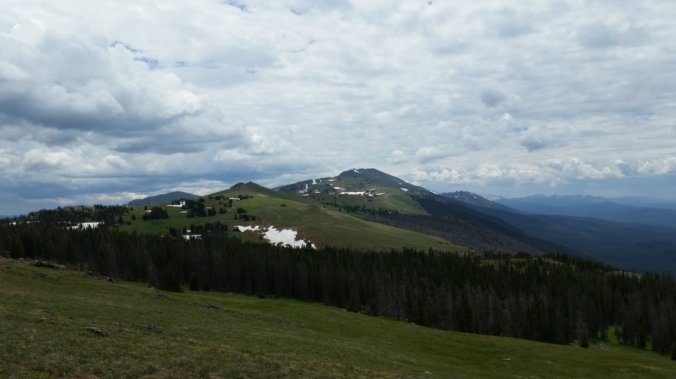