Last summer, I got to take advantage of one of the perks of the day job, which is some free access to some pretty great outdoor recreation equipment.  I can check out tents, packs, snowboards, mountain bikes, canoes, paddle-boards, and sit on top kayaks.  So really I have no excuse when it comes to getting out more when it comes to equipment.

On a hot day in June, I checked out a sit-on-top kayak (since all the paddleboards were checked out) and headed to Horsetooth Reservoir west of Ft. Collins, Colorado.  The fee is pretty reasonable to get in, I think around $7 for the day.  Parking wasn’t too bad when I arrived, but it has the potential to fill up.  When I loaded the kayak onto my Jeep, it was pretty easy, but since I do most of these trips myself or with my kids, I realized that it was a little bit more difficult to unload the kayak than it had been at the campus gear shop when I had help. 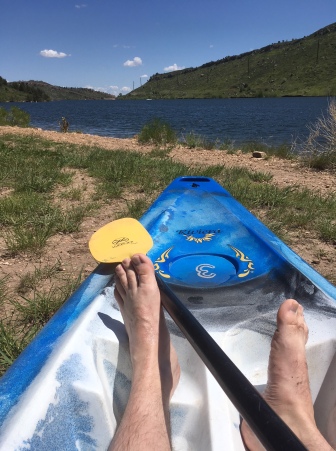 Kayaks work better in the lake.  Who knew!

The equipment I was given was a kayak paddle, a kayak, and a lifejacket.  I brought along water, snacks, a lunch, a jacket and plenty of waterproof sunscreen, because being on a lake in the summer in Colorado is much like being a bag of microwave popcorn.  Second and sometimes third degree burns are not uncommon, even on cloudy days.

This is probably awful for me to admit, but once the boat was in the water and I started trying to figure out how to paddle the sucker, the lifejacket soon lost its charm.  I was rarely more than a short distance from the shore anyway, unless I decided to paddle to the other side of the reservoir, in which case, there are plenty of tall wakes and speeding boats to navigate.  There’s something to be said about being a couple hundred yards from shore paddling your way across the grain from boats going 30 mph or more.  The lifejacket went back on in that case.

Mostly I followed the shore line and went into a few inlets, one where large boats were docked year round, and the other which was just the thing for being on calm, flat water without 5ft. wakes to contend with.  Sunbathers, fishers, and people killing beers in the sun drift in and out. Everyone is friendly. On a kayak, it was a good place just to drift and work on the tan.

With following the shore and a few crossings, I probably did anywhere between five and seven miles of paddling that day.  By the time I reached my jeep, I had to lift the boat onto the roof myself.  My eyes were sunburned, my arms, back, and core were aching and that 150lb boat must have weighed a few tons.  It was marvelous.

The second trip to the reservoir was with friends, whom I had told about the kayaking trip, but unfortunately the gear shop was out of kayaks by the time we coordinated plans to meet up. What we were left with was a three person canoe.  We followed much the same course, opting against crossing the reservoir and instead just following the shore to a few of the inlets. 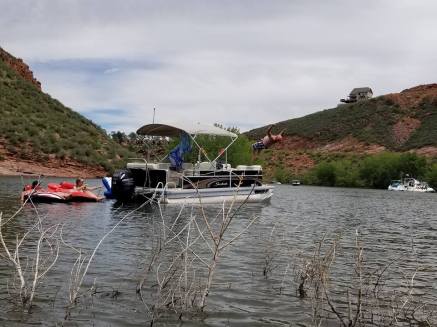 Do a back-flip! Photo by Jamie Price

We met a lot of friendly folks.  One man even did a back-flip off his boat before giving us beers.  Canoes are a whole different critter than a kayak, with so much of your effort being dedicated just to moving forward in the water, and trying to maintain some kind of course.  It’s exhausting.  Wet.  And when you are done, you have something even heavier to attempt to lift onto the roof of your vehicle. They don’t handle speedboat wakes very well either. My recommendation, leave the canoes at Summer Camp where they belong and indulge yourself in either a powered watercraft or a kayak or paddleboard of some kind.  But they are still a lot of fun if that’s what you are stuck with!

If you are interested in Horsetooth Reservoir, here’s a map!

Tips for paddling on the lake.

Don’t forget to do something afterwards.  My friends and I got appetizers at Old Chicago.  After that much physical activity, you need to fill the tank up again.  And allow some time to stop feeling the up and down pitch of the boat.  That took a couple days for me!

Arr! There be pirates! Photo by Jamie Price